People impacted by Canada’s shameful legacy of residential schools, or those triggered by the latest news cycle, are invited to contact the Indian Residential School Survivors Society toll-free at 1-800-721-0066. Emotional support and crisis service referrals are available through the 24-hour national crisis line at 1-866-925-4419.

On May 28, 2021, the remains of 215 Indigenous children were found at Kamloops Indian Residential School (IRS) in British Columbia, one of Canada’s 139 such institutions, the last of which closed in 1996. Some of the children found were as young as three, sparking nationwide mourning and a renewed call from Indigenous leaders to investigate all IRS sites.

Between the 1800s and 1990s, approximately 150,000 Indigenous children attended IRS institutions. An estimated 6,000 of them did not return home.

A BRIEF HISTORY OF THE IRS SYSTEM

The residential school system was established and funded by the Canadian government and run by churches (namely, Anglican, Presbyterian, United, and Roman Catholic) with the intent of “killing” the “Indian child.”

Between the ages of 6 and 16, Indigenous children were forcibly removed from their homes to attend residential schools where they were taught to speak English and French and adopt Euro-centric ways of living. Children were not allowed to acknowledge their Indigenous culture.

Students were away from their families for 10 months a year, sometimes longer. Boys and girls were separated, preventing siblings from different genders from seeing one another.

Attendance was mandatory for all Indigenous children. The government employed agents to ensure all attended.

Education and living conditions were sub-par. Students were taught about manual labour, agriculture, and domestic work. The schools were severely underfunded and in some places, students attended classes part-time and worked for the school the rest of the day.

According to the University of British Columbia (UBC), this was framed as “practical training,” but the work was mandatory and unpaid, and their work was necessary to sustain the school’s daily operations. 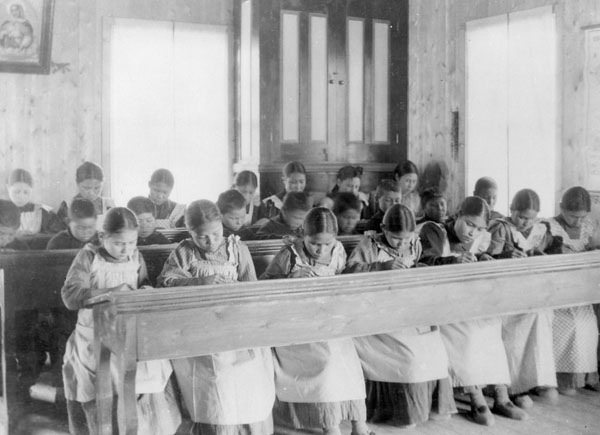 Students were discouraged from pursuing university education and many returned home from IRS only to find they no longer fit in. The IRS system caused widespread, generational trauma that Canada’s Indigenous communities are dealing with to this day.

“The residential school system is viewed by much of the Canadian public as part of a distant past, disassociated from today’s events. In many ways, this is a misconception,” UBC says.

“The last residential school did not close its doors until 1996, and many of the leaders, teachers, parents, and grandparents of today’s Indigenous communities are residential school Survivors. Although residential schools have closed, their effects remain ongoing for both Survivors and their descendants who now share in the intergenerational effects of transmitted personal trauma and loss of language, culture, traditional teachings, and mental/spiritual wellbeing.”

In the 1980s, survivors of the system began to come forward with formal allegations of physical, psychological, and sexual abuse endured at the schools, with more than 38,000 claims leading to fewer than 50 convictions.

In 2006, the Indian Residential Schools Settlement Agreement (IRSSA) was set up between the Canadian government and an estimated 86,000 IRS survivors, recognizing the genocide and damage inflicted on Indigenous communities. A $1.9-billion compensation package called the Common Experience Payment (CEP) was established. By March 2016, more than $1.6-billion had been distributed to more than 79,000 survivors, with an additional $3.1-billion paid out as of December 2018.

In Canada, September 30 is Orange Shirt Day, an initiative to reflect on the damage inflicted on children in the IRS system. It is often referred to as the ‘Every Child Matters’ movement.

A scathing report released in January 2020 finds 30 per cent of incarcerated individuals in Canada are of Indigenous heritage as Indigenous leaders continue to speak up about entrenched racism embedded in Canada’s justice and policing systems.

In December 2020, British Columbia health authorities acknowledged the presence of racism and discrimination toward Indigenous people in the health care system, confirming it has uncovered many “disturbing” incidents after hearing from nearly 9,000 voices, collected through surveys, direct submissions, health care data, and interviews from patients and health care workers.

“The review also found that this widespread racism has long been known by many within the health care system, including those in positions of authority, and is widely acknowledged by many who work in the system,” the report read. In a press release, Te’ta-in (Sound of Thunder) Shane Pointe, the Knowledge Keeper for the report called for health officials to “bring dignity to those who have not been afforded it.”

According to a 2020 report Tech Conference Board of Canada, Indigenous people make up 4 per cent of the country’s adult population, but less than 2 per cent of Canada’s total STEM workforce.

“These barriers are often related to social inequality and inadequate resources, as well as racism and cultural conflicts between Indigenous and non-Indigenous societies,” the paper reads.

And in May 2021, Indigenous groups and the Government of Canada are partnering to invest more than $230,000 to upgrade STEM educational facilities at Yellowhead Tribal College, an inclusive educational institution in Edmonton, Alberta, Canada run by Alexander First Nation, O’Chiese First Nation, Sunchild First Nation, and Alexis Nakota Sioux Nation.

The project is part of an effort to boost student enrollment, particularly among Indigenous students in STEM fields.

LEARN MORE ABOUT (AND SUPPORT) INDIGENOUS COMMUNITIES IN CANADA

How ‘weight bias’ is harming us all

In Canada, Ontario students continue to struggle with math