Two years ago, California became the first U.S. state to ban discrimination against natural hair. The act was officially signed into law on July 3, 2019, and went into effect on January 1, 2020.

WHAT IS THE CROWN ACT?

The CROWN Act is a law that prohibits discrimination against natural Black hair.

CROWN stands for “Create a Respectful and Open World for Natural Hair,” and it makes the denial of employment and educational opportunities due to hair texture or protective hairstyles — including braids, locs, twists or bantu knots — illegal.

The act was first introduced by Los Angeles Democrat Sen. Holly Mitchell in 2019.

“This law protects the right of Black Californians to choose to wear their hair in its natural form, without pressure to conform to Eurocentric norms,” Sen. Mitchell said in a statement.

“I am so excited to see the culture change that will ensue from the law.”

“I have worn braids before but I have not worn braids in session. Just so used to … conforming to the Eurocentric norms,” she told NBC News affiliate Kare 11.

“It may be difficult to see and believe that here in Minnesota discrimination is real. I think often when you are not being seen as different or discriminated against because of your hair you do not know it is a problem.”

So far, the CROWN Act has been passed in 13 states, up from 7 states the year prior. Sure, that’s an improvement, but it means there is still no specific law protecting against Black hair discrimination in 37 U.S. states. 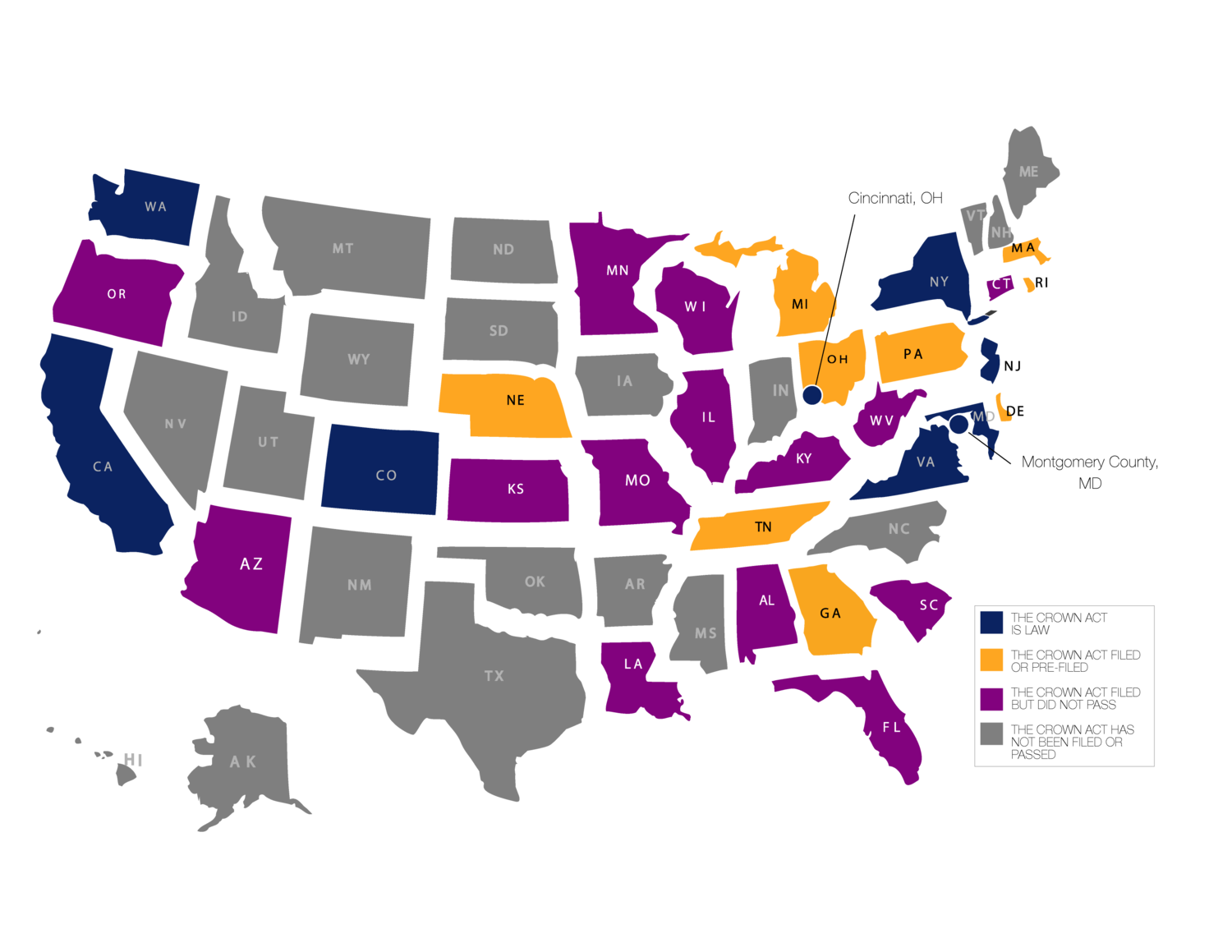 A HISTORY OF DISCRIMINATION

Hair-based discrimination has been an issue for decades but it re-emerged in December 2018 when a New Jersey school district ordered a black high school wrestler to cut off his dreadlocks or forfeit a match.

Then, in 2019,  DeAndre Arnold was suspended from his Texas high school and told he may be banned from graduation if he kept his dreadlocks, which he has been growing since seventh grade.

These and many other stories inspired the CROWN Act, which was first signed into law by California Gov. Gavin Newsom.

The increase in visibility and support for the movement follows Matthew A. Cherry’s Oscar win for the short film “Hair Love”, which features a black father learning to do his daughter’s hair.

Cherry used his acceptance speech to draw attention to the CROWN Act.

“‘Hair Love’ was done because we wanted to see more representation in animation, we wanted to normalize black hair and there’s a very important issue out there, the CROWN Act,” he said.

“If we can help get this passed in all 50 states it will help stories like Deandre Arnold’s … stop to happen.”

For the latest updates on state developments, visit thecrownact.com.

5 ways MacKenzie Scott’s $5.8 billion commitment to social and economic justice is a model for other donors

Survey: One in five employees feel more qualified than their boss

Impostor syndrome may be more pronounced among first-gen students